Fill all your new courses on day one 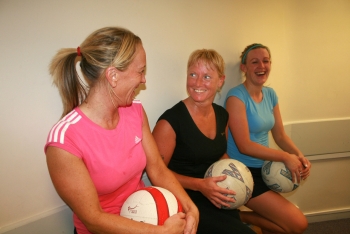 In Hillingdon they’ve been using the Make Sport Fun approach for their marketing, and are now able to immediately fill any new classes and courses they put on.

Lorna Radford from Hillingdon Council attended a teleseminar I ran last year about the Go London Greenwich programme. In that seminar I explained that you should ask people to register their details, and tell you what activities they’d like to do (you can still download a recording of the call).

She added that process in to Hillingdon’s existing marketing system when putting on the new Sport England funded Back to Sport programme. When you go to the Back to Sport web page there’s an online form which asks you what activity you’d like to do and your contact details. On their posters, leaflets, etc. they have a text code, and if someone texts to register they get a automated reply text with basic information about getting active, and a request to register online for more detailed information.

Lorna then emails everyone who fills in the form with details of where they can do the activity of their choice. She told me “Since starting collecting Back to Sport Forms back in January 2012 we’ve had 333 response forms.

“The tennis sessions have been really, really popular. By far the most popular. We’ve also exceeded the netball targets. Some of the sessions are pay as you go – badminton, tennis, netball, swimming – and some of them have courses. For example archery has had a 4-week beginner’s courses which has been filled every time with the new approach.”

The online form also asks people about sports which aren’t available at the moment, but could be organised. Archery was one of these. So many people were interested in archery that Hillingdon put an archery course on and emailed everyone who’d said they were interested. They immediately filled the course. They still had so many people wanting to take part that they ran another course and filled that too!

Imagine that. Imagine if you knew in advance what activities people want you to do, and if you knew the contact details of the people who wanted to do it. It would mean you could put on exactly the right activity in the right area at the right time on the right day, and then fill it on day one with no extra marketing budget. That’s just part of why the Make Sport Fun approach is so powerful. To learn more about it download our introductory guide to sport and activity marketing.

UPDATE MARCH 2013: I’ve just talked to Lorna and she’s now up to somewhere between 450 and 500 people who’ve registered.