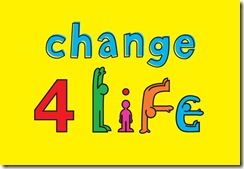 Some of the key findings are that at the end of February 57% of the public have heard of Change4Life, and 63% of mothers have heard of it.

There are now numerous resources for helping you to promote Change4Life and to use it to promote your own activities – details of all of them are available here. Obviously promotingactivity.com remains the place we would recommend above all else.

Next phases of campaign

The current phase of the Change4Life campaign focuses around rooting the behaviours. One of eight behavioural changes is being promoted in the latest TV commercial. The ‘Me Size Meals’ advert focuses on the fact that parents often give their kids the same-sized portions as themselves when really they need much less (in research this was seen by mums as one of the behaviours they would find easy to change). They will post the new advert onto the DH YouTube page this week.

The ‘We’re In’ phase of the campaign was due to begin in May and run until September, but it is being pushed back and it is more likely that this will begin in the second week of June.

Part of this activity involves access to regular space in local press titles across England.