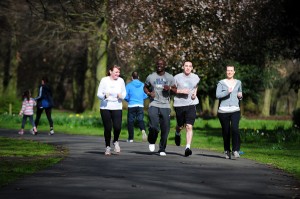 A group of council staff in the London Borough of Bexley have been proving that there is a big appetite out there for organised running after starting up their own jogging club.

The club organically evolved out of the 5K Your Way initiative run by Pro-Active for the East London region, which brought representatives from eight London boroughs together for a 5-kilometre charity race. Part of this event involved offering eight weeks of walking and jogging training to encourage complete beginners to take part and, to help achieve this, Pro-Active paid for two members of council staff to be trained as Run in England jog leaders and for one other to take the Natural England walk leader qualification.

After the 5K Your Way training had finished and the race had been run, a large group of people at Bexley Council were still keen on the idea of regular jogging and one of the jog leaders was happy to keep the training going, so a jogging club was formed.

There are now a total of 22 members of staff gathering for organised jogging sessions and the running ability of the members has increased to the extent that people are regularly entering 5K and 10K runs. Members are now looking at the possibility of making the club open to anyone who wants to get involved, rather than just council staff, and to try and have the club accredited by England Athletics. The club has been set up at minimal cost although the council has funded jog leader training for two more members of staff at the cost of £180.00.

“We are delighted with the success of the running club, particularly as it has happened right on our doorstep!” says Sarah Nicholls, Active Bexley Co-ordinator at the London Borough of Bexley. “This is a wonderful example of how a sports club has grown organically and of people championing their cause locally. It’s pretty much self-regulating and other people get involved through word of mouth, so from a marketing point of view it is incredibly cost effective.”