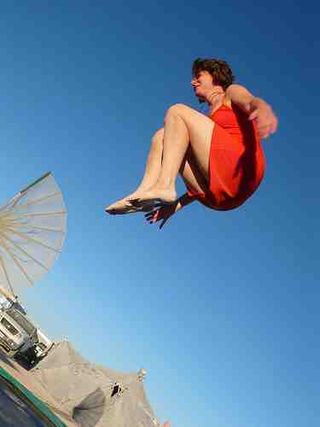 Northampton Trampoline Centre is one of the fastest growing clubs in Northamptonshire, and its no surprise when you see the approach they’ve taken to marketing themselves.

Young gymnasts from Northampton appeared in an episode of LazyTown, one of the most popular programmes on children’s TV recently.

A film crew from the CBeebies TV show spent a day at the Northampton Trampoline Centre in Moulton Park in July and the footage was shown in late October.

Harvey Smith, business development director of the Trampoline Academy said: “All the children involved were elated.

“They could not believe they were going to be in a production and were all chuffed to bits.

“The film crew took over the centre for a day and it was really good seeing how everything was done. LazyTown has certain themes and this episode is about trampolining. They did an interview with two gymnasts and they showed them the basic skills of trampolining.”

All the children who took part were aged under 11 years old and were part of the young development squad which trains six to eight hours a week.

Mr Smith said it was not the first time trampolinists from the academy had appeared on TV, as gymnasts had also appeared in episodes of Blue Peter and You Bet.

The academy has gained accreditation from British Gymnastics and Sport England. It is a premier club in the UK with a world-class coaching team producing success at national, European, World and Olympic level.

In this year’s European Championships, three gymnasts from the academy, Jaime Moore, James Higgins and Steve Walsh were finalists in the senior categories.

If you would like to find out more details about the Northampton Trampoline Centre go to www.ntga.co.uk or call Northampton 01604 645 120.