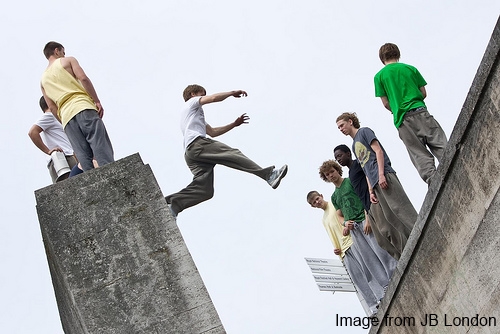 WHEN Heather Coates joined the StreetGames network as a project manager for the YuSport hub in Enfield, she encountered an unusual problem.

Arriving at a new venue, a youth club on a notorious estate for anti-social behaviour in Enfield, Heather and her staff discovered a group of young men hanging out on the roof. They refused to come down and didn’t want to participate in any of the new sports sessions that were being laid on.

Thinking laterally, Heather decided that to incorporate the roof into her sports plan by introducing Parkour. She called on a group of French coaches in free running to come and help her demonstrate that jumping off buildings is a lot more fun than sitting on them.

Heather said: “The council has invested a lot of money into the estate and the youth club over the years but not managed to sustain any activity whatsoever. All the things they have put in place have just come to a natural end. Then they will pick up more funding, run six more weeks of sessions and it will end again.

“When we arrived on the first day, we knew it wasn’t going to be an average site. The young people didn’t want to engage in the sessions, they just wanted to sit on the roof. When the Parkour coaches turned up, they started to jump off the roof and back-flip off the walls while the kids were sitting there.

“The kids all started looking and saying: ‘What are they doing?’ We said: ‘We’re running a session, it’s free. Come down and get involved if you want. If you don’t want to, that’s fine, too.’ By the end of that session, they were all off the roof and completely engrossed by these crazy Frenchmen jumping off walls.

“They completely and utterly fell in love with Parkour. It was something they could do on their own. They had had years of football on offer, basketball on offer. It was always free and it had been going on for years but they had never turned up.

“Everything has escalated from there. It took three months before they were regularly turning up for Parkour, taking part every week and actually speaking to members of staff as opposed to getting involved but not saying a word to anybody.

“I did wonder during that time whether it was ever going to happen. I thought: ‘This is a hard one to crack. There are bigger issues here than are apparent.’