Bucks Sport get 300 new people into running and netball 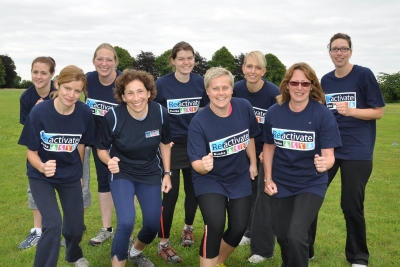 I recently interviewed Kirsty Ingham from Bucks Sport about their Reactivate Bucks programme. This is their sport and activity participation programme. They have an ongoing year-long promotion and 3 bigger marketing pushes per year. Their recent promotion successfully got 300 new people into sport.

I’ve explained here how they achieved it using the six stages of an effective sport and activity marketing campaign.

Audience – the focus was on the Alison segment for this campaign (one of the 19 Sport England segments). This segment represented the group of people that they and their partners most wanted to reach, and had resources and activities for.

Objectives – while they didn’t have a set objective at the outset, they were focussed on contributing towards the overall participation targets for running and netball.

Budget – they had a budget of £5,300 for the marketing activity, this doesn’t include officer time or the coaching and facility costs. £3,200 on adverts and £2,100 on postcards and printed material. Because there wasn’t a huge budget they kept the campaign very focussed on just one segment to make the money go as far as possible.

What activity to offer – they took the opportunity to analyse the segmentation data to understand more about the Alison segment. This showed that running and netball were two of the activities that Alisons were likely to take up. These were also sports where the NGBs had developed good products in the form of Back to Netball and Run England, and where they had good partnerships locally.

Back to Netball is one of the NGB offerings that has really taken off in Bucks. The Netball Development Community Coach works from the Bucks Sport office and she delivers some of the sessions herself. It really helped that they have such a great working relationship.

Run England has been another success story in Bucks. Abbi McKane is the Physical Activity Development Officer at Bucks Sport and is heavily involved in delivering the Run England programme in the area. One of the reasons the Reactivate team like this programme is because of the focus on beginners – people that are new to it. After all, not everyone is comfortable wearing lycra in public!

Once they’d done their planning they contacted all the Run leaders and Back to Netball leaders to get them on board with the programme.

Ways to register – For all the Back to Netball sessions the netball coach was the point of contact, and runners were directed to the local activator. The Buckinghamshire area has four activators and people can either email or call the coach’s mobile. 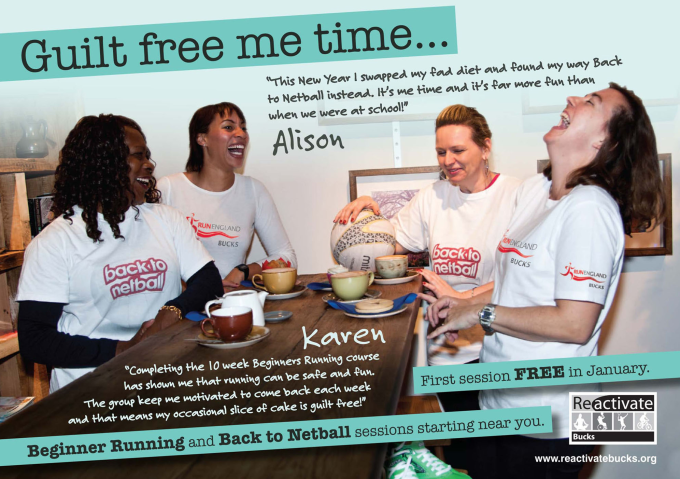 Postcards – To help preserve the budget they did the photo shoot themselves, and used people from their existing netball and running groups. In line with the informal message that the marketing plans recommend for the Alison segment they focussed on social activities after the game has finished – a very popular tactic! They produced a version of a promotional card for each district. They didn’t have the budget to distribute these directly, so they worked with the local run leaders and netball coaches. These were most effective where the local leaders were engaged and willing to do the legwork.

Social media – They posted information on their Facebook and Twitter accounts, then got existing leaders to post photos from their existing sessions along with the session details.

Refer a friend – The ‘refer a friend’ system was a very effective strategy. This went out to everyone at the runners and Back-to-Netballers, with the offer of a free t-shirt for anyone who referred a friend to the programme.

Word of Mouth – While these, along with coverage in local magazines, were very effective, the best promotional tool was word of mouth – so get talking!

Further information was always available from the website but the main call to action was to ring an activator or the netball development community coach for more information. Over 80 enquiries came in this way, now maybe as many as 100.

The first session was free for the whole of January, though some groups carried that on for longer. The wintry weather kept some people from taking part, so many did more promotions in February.

When most of the groups were already up and running, they also set up workplace groups at lunchtime, where they train an internal champion.

Overall they got 300 new participants to Running and Netball sessions, who were all new to the sports.

One thing they did to keep people coming was to establish links with a local independent coffee shop – which already had an offer where you could get a card stamped with each coffee to get your 8th coffee free. They linked in to this offer so that every time someone attended a netball or running session they got an extra stamp. This proved an extremely good cross promotion for the coffee shop, and a bonus for people attending the sessions. Kirsty’s keen to replicate this with a larger chain or with more independent coffee shops.