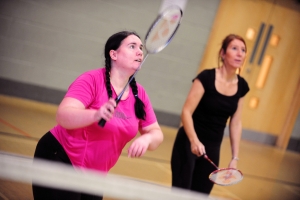 Over the course of the Olympics BADMINTON England signed up over 6,500 people to their free membership programme called Club England Community. They’ve emailed all 6,500 people directing them to their Play Badminton website. When they have a new session they are able to email people living nearby promoting it. This promotion has led to a 102% increase in people accessing their website.

They ran this promotion in London, Birmingham and Manchester. The London element was at Hyde Park through London Live. London Live was a major festival celebrating the Olympics which took over one whole side of Hyde Park, with a massive enclosure, 6 big screens, restaurants, bars and events. BADMINTON England had a tent for 2 weeks as well as demonstrating on the sports stage. They had fun badminton competitions with prizes, and they got anyone who took part to sign up to their free membership.

In the future one of their main targets is to get more people signed up to their database. “We’re good at talking to people who play badminton.” says Jenny Douch, regional officer “but people who are outside of that loop we haven’t been so good at talking to. This new approach is changing that.”

Following up from this they’re going to do a survey to find out the results of the programme.